The client is a leading global healthcare provider with a strong focus in the pharmaceutical and chemical markets. They are recognized for their high quality products and services that source a number of healthcare businesses around the world. They commit to improving healthcare services and increasing access to affordable healthcare.

This is an ongoing project that began in 2014. The client had a warehouse full of surplus assets at their Broomfield location and they were unsure of the fair market value of the equipment. The client also noted that aside from these assets, they had additional surplus that was still in use at their site. They needed to gain sales quickly, and requested that some equipment be sold prior to the end of the year in 2014.

EquipNet’s specialists inventoried the surplus assets at the client’s warehouse and provided the fair market values, which some ended up being higher than the client had intended. Respecting the client’s end- of-year deadline, EquipNet was able to sell two Unipress tablet presses for a total of $50,000 within one week of activating the equipment.

EquipNet currently has buyers lined up for the client’s surplus for when the decommission process is complete. Once this process is finished, EquipNet plans to sell all of the surplus equipment as soon as possible. EquipNet is currently negotiating the sale for the high sheer mixer for the client’s facility as well. This is saving the client over $600,000 versus buying the equipment new. The client and EquipNet are very satisfied with the progress of this ongoing project and look forward to its continued success. 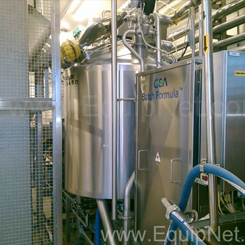